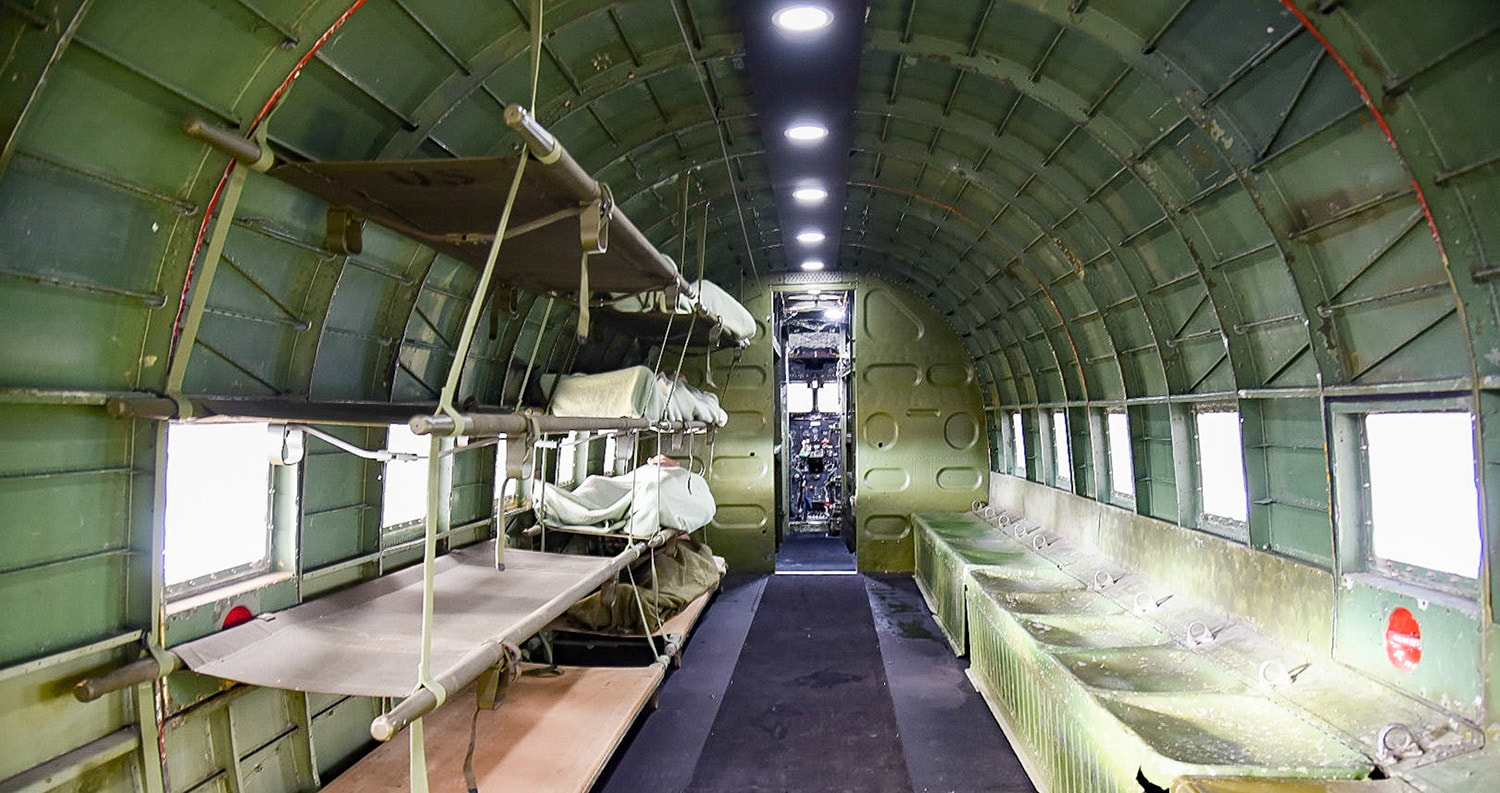 The inside of the Dakota has been fitted out with 8 stretchers on the left hand side and Paratroop seats on the right for the walking wounded to be in keeping with the role played by Dakotas passing through Metheringham.
​The C47 Dakota (Douglas Aircraft Company Transport Aircraft) or ‘gooney bird’ was the air transport ‘workhorse’ of WW2. Developed as a robust militarized version of the DC3 civilian airliner, over 16,000 were built, with production commencing in 1941. General Eisenhower named this aircraft as one of his four “Tools of Victory”. A ubiquitous transport aircraft it carried not only freight such as food, water, ammunition and fuel but also troops. This is exemplified by the aircraft’s role in the airborne operations of Sicily, D-Day, Operation Market and Operation Varsity, the crossing of the Rhine in March 1945. Moreover, empty aircraft returning from combat zones after transporting supplies were also utilized within the evacuation chain, evacuating injured troops to hospitals in the rear areas. Many injured US service personnel requiring repatriation to the USA were evacuated by the Dakotas of US 52nd Troop Carrier Wing from RAF Metheringham. Acting as a supporting airfield and Air Evacuation Centre, the 52nd Troop Carrier Wing predominantly comprised of the following Troop Carrier Groups (TCGs) based at other nearby airfields: 314 TCG (US Army Air Station 538, Saltby), 313 TCG (USAAS 484, Folkingham) and 61 YCG (USAAS 483, Barkston Heath).

​The first such evacuation was on 15th May 1944 when 19 patients from the nearby US Army 7th and subsequently 162nd General Hospitals, Nocton (https://www.med-dept.com/unit-histories/162d-general-hospital/), were flown in a single Dakota to Renfrew, Scotland. This marked the start of RAF Metheringham as the recognized Air Evacuation Centre for this US Army General Hospital. Patients were flown from RAF Metheringham to either Renfrew or the Transatlantic Military Air Terminal at Prestwick for onward air repatriation to the USA via Greenland and Newfoundland.

Before the end of the war, air evacuations by up to 9 Dakota aircraft at a time would occur from RAF Metheringham, on at least 30 occasions. Between 15th May 1944 and 8th May 1945 it is known that at least 1693 US service men were medically evacuated by air from Nocton to the USA, starting their journey at RAF Metheringham.

In only two documented instances were casualties received by air at RAF Metheringham direct from the combat zone; in neither case were the aircraft or casualties expected. On 1 December 1944, 11 Dakota aircraft landed evacuation 300 ambulatory injured troops directly from France. Similarly, on 14 April 1945, 5 Dakotas carrying 17 stretcher and 83 ambulatory cases enroute to Renfrew, Scotland, were forced to land at RAF Metheringham.  There was approximately 30 minutes notice in which to prepare to transfer these patients to the wards at Nocton Hall, 7 miles away. The patients returned to RAF Metheringham the next day to continue their onward journey back to the USA.