Donate to the Dakota Hangar Project

Local companies support the restoration and maintenance of KG651
The  Dakota hangar is a large financial and logistical undertaking for a small museum that is funded mainly by donations and run by unpaid volunteers. We have asked for help from many sources and we have received several generous donations from supporters in the UK and abroad. We have used local businesses and contractors as much as possible and several have been very generous. Recently, Witham Oil & Paint very kindly donated the two pack epoxy paint for the newly laid concrete walkways after we asked them for some advice about how to  finish the concrete paths for the public display area.

As the hangar is large, most jobs tend to be large (and expensive) as well. After we were given detailed instructions for preparation and application of the paint it took our floor painting team of six, two full days to complete the task but it looks splendid now. Project leader Ian Brett said “We have been very fortunate with many local firms supporting our efforts. A big thank you to Witham Oil & Paint for all your help, it has been very much  appreciated.”

Check out the video below to see our volunteers transforming the hangar floors using the materials supplied by Witham Oil & Paint.
The History of KG651 - Incident involving KG651 when flying as civil aircraft G-AMHJ
If you would like to own a piece of aviation history you can buy a Dakota / DC3 keyring here: ​https://mavc.onlineweb.shop/Douglas_C47_Dog_Tag/p6698945_20521039.aspx
The History of the Dakota and RAF Metheringham's KG651
The first such evacuation was on 15th May 1944 when 19 patients from the nearby US Army 7th and subsequently 162nd General Hospitals, Nocton (https://www.med-dept.com/unit-histories/162d-general-hospital/), were flown in a single Dakota to Renfrew, Scotland. This marked the start of RAF Metheringham as the recognized Air Evacuation Centre for this US Army General Hospital. Patients were flown from RAF Metheringham to either Renfrew or the Transatlantic Military Air Terminal at Prestwick for onward air repatriation to the USA via Greenland and Newfoundland.

Before the end of the war, air evacuations by up to 9 Dakota aircraft at a time would occur from RAF Metheringham, on at least 30 occasions. Between 15th May 1944 and 8th May 1945 it is known that at least 1693 US service men were medically evacuated by air from Nocton to the USA, starting their journey at RAF Metheringham.

In only two documented instances were casualties received by air at RAF Metheringham direct from the combat zone; in neither case were the aircraft or casualties expected. On 1 December 1944, 11 Dakota aircraft landed evacuation 300 ambulatory injured troops directly from France. Similarly, on 14 April 1945, 5 Dakotas carrying 17 stretcher and 83 ambulatory cases enroute to Renfrew, Scotland, were forced to land at RAF Metheringham.  There was approximately 30 minutes notice in which to prepare to transfer these patients to the wards at Nocton Hall, 7 miles away. The patients returned to RAF Metheringham the next day to continue their onward journey back to the USA.

Whilst the Dakota in MAVC’s collection is not one that was used at RAF Metheringham, it was bought and put into active service by the RAF in 1944. It was then sold in November 1946 and converted into a civilian aircraft, finally being retired from operation in 2000.

Extracts taken from ZN Newsletter written by Group Captain Ian Hindle JP, PhD, MSc, BDS, FDSRCS, FFDRCSI RAF (ret).
Winter 2020 Update
​It's been a long time since the last update on progress with the Dakota hangar at Metheringham Airfield Visitor Centre. As with many similar attractions the museum didn't open this season because of the COVID 19 restrictions. Progress with the hangar build also came to a halt for several months, firstly because the site was waterlogged after the extremely wet end to 2019 and then when it did dry out, the first lockdown happened.

Skinns, the local contractor building the hangar, have struggled to catch up with work time lost over the lockdown but have made some progress with the hardcore for the concrete pathway inside the hangar. The roof is complete, and gutters are taking the rain water away from the site now. In the next few days, we hope to have some concrete pathways and side panels fitted. That will be all we can fund for the next few months, the hangar end panels will not be fitted until funds are available, hopefully before next Winter. Our fundraising took a big hit this year with the museum unable to open, most of our income is from visitors in the Summer season.

Although we were unable to do much work on the Dakota over the Summer, we have been busy trying to obtain a pair of propellers for the Dakota. The owner of the props we had on loan took them back in early 2019 leaving it looking rather sad with no props. We had high hopes for the manufacture of some replicas, but this wasn't to be. In the meantime, we asked around any possible sources and were helped out by our friends at Coventry Airport. We have had a few small items from them before to help with the display of KG651, many thanks to the team restoring another Dakota to flying, "Night Fright"  https://www.night-fright.com . We hope to see it flying again soon, on completion of the mammoth restoration project. The prop was soon assembled and fitted to the left engine, a big improvement. We need to locate another prop now. Although many thousands were made in the 1940’s and 50’s they are a little thin on the ground in the 2020’s.

With the Dakota under a roof for the first time in many years it has weathered the wet 2019 Winter well and seems to be fully dried out now. We plan to restore the paintwork back to a WW2 European theatre dark green finish with grey undersides at some point as it has faded to a rather pale version in the years it has stood outside at Metheringham. We have chosen to commemorate both the RAF and USAAF using paint schemes that will best represent the history of the aircraft and those Dakotas that operated at RAF Metheringham in WW2.  Some decisions will have to be made on how to best display KG651 within the weatherproof but restricted space of the hangar.

For more information on the museum and KG651 and to make a donation visit:  https://www.metheringhamairfield.co.uk  .  The popular key rings, made from a section of wing skin (removed during a repair), are still available from the website shop, along with many other things. We now do a G-AMHJ version as well to mark KG651’s civilian life and a "dog tag" version of both. An ideal Christmas present for the person who has everything. 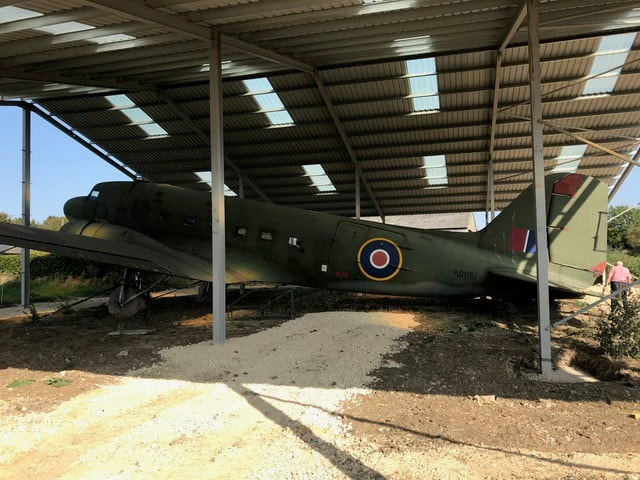 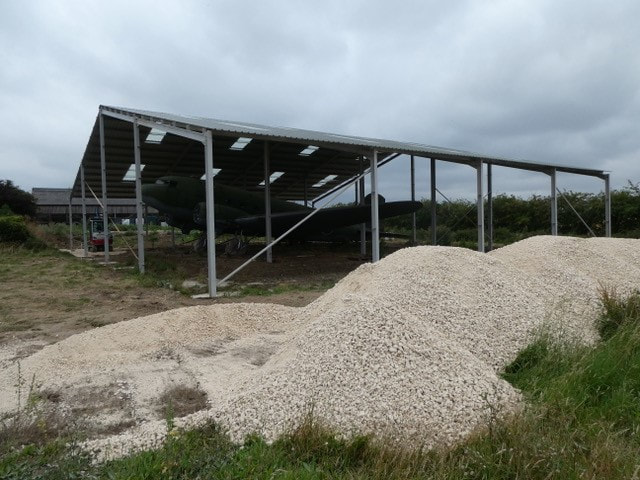 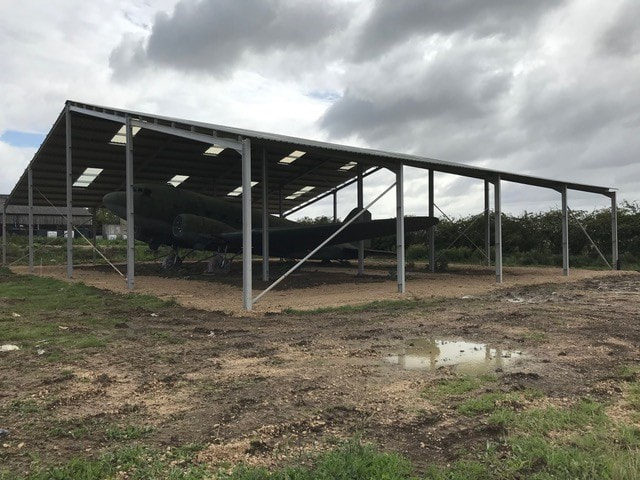 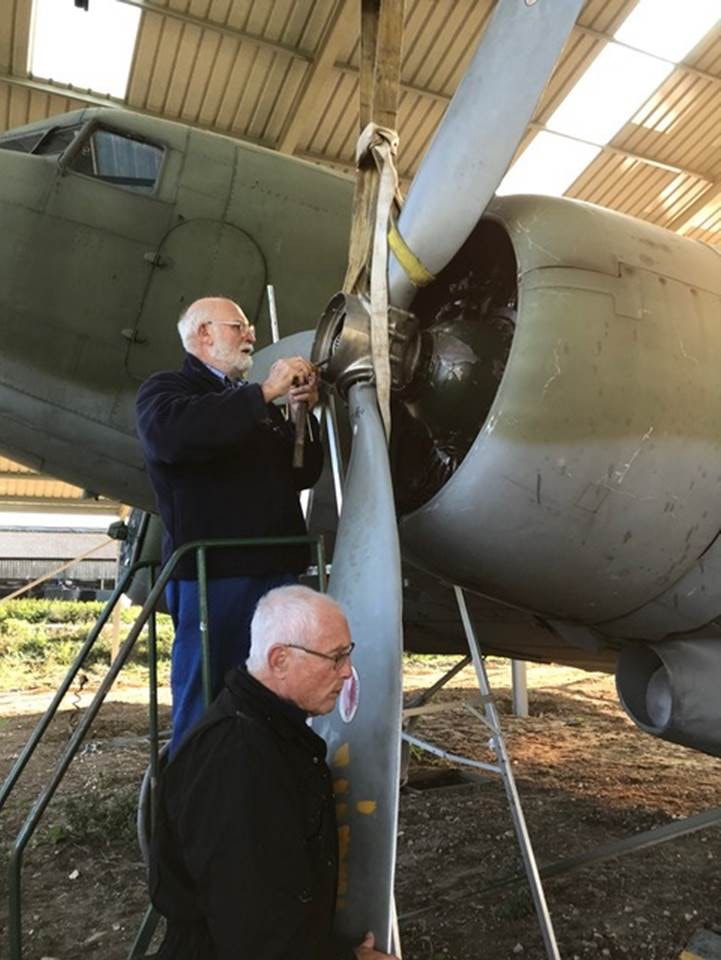 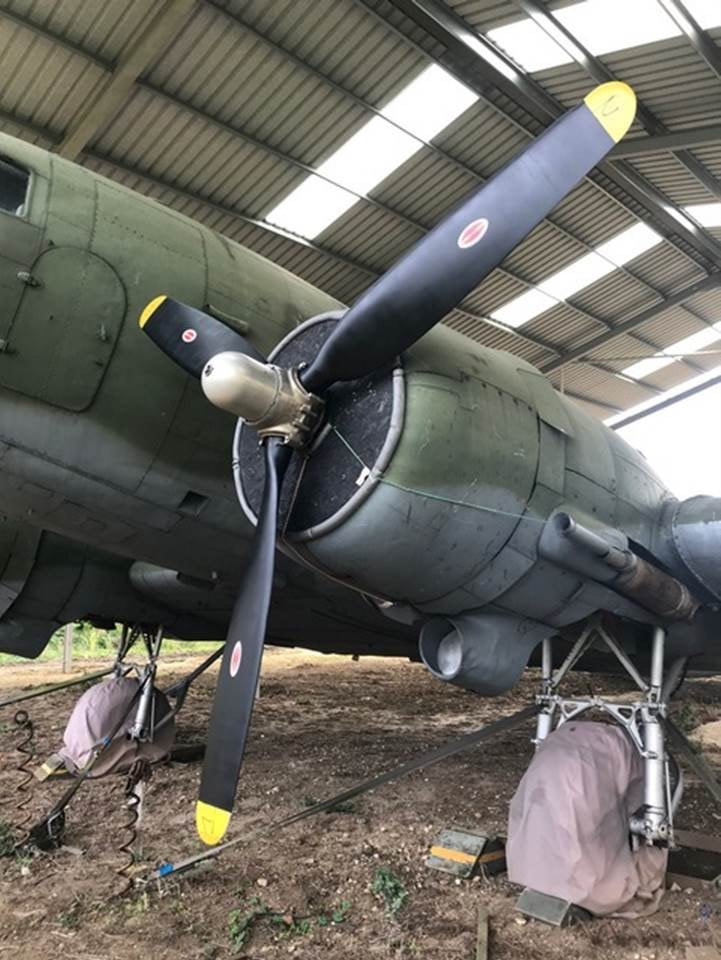 Summer 2020 Update
​As the curatorial team and Dakota team have recently returned to site, our contractors have been able to complete the concreting of the stanchions and they are in the process of laying the three metre wide walkway around the inside of the building. They will also create a pathway from the walkway to the aircraft's cargo door, which will greatly improve access for volunteers and visitors alike.

We have also agreed with them to proceed with the fitting of the two side walls and to install guttering, which should prevent further flooding and make the building reasonably weatherproof as Autumn approaches. Unfortunately finances do not permit us to progress any further in this calendar year, but at least the aircraft will be properly undercover and available to visitors when we reopen in 2021. If you would like to donate to the Dakota Hangar fund why not buy a Dakota key ring or dog tag here: https://mavc.onlineweb.shop/Gifts/cat6698946_4610017.aspx. Alternatively you can make a donation to the Dakota Hangar Project here: https://mavc.onlineweb.shop/Dakota/cat6698946_4602220.aspx. 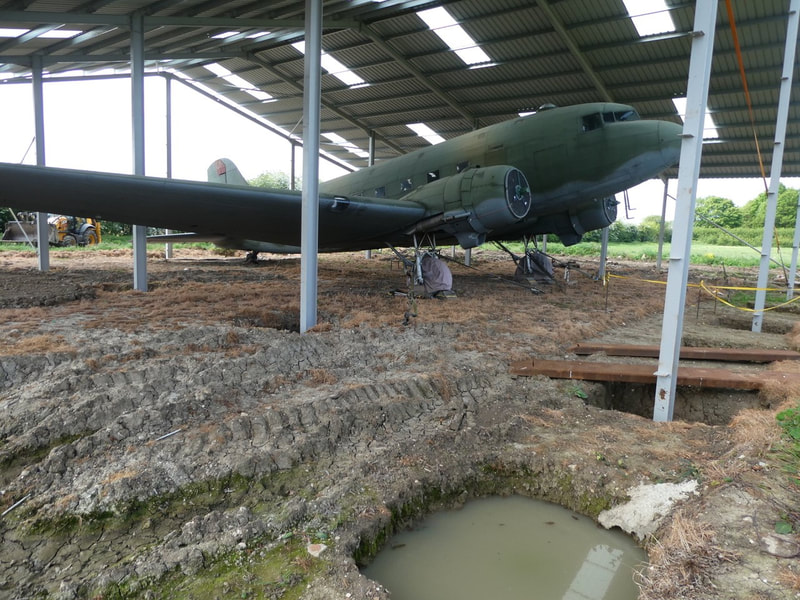 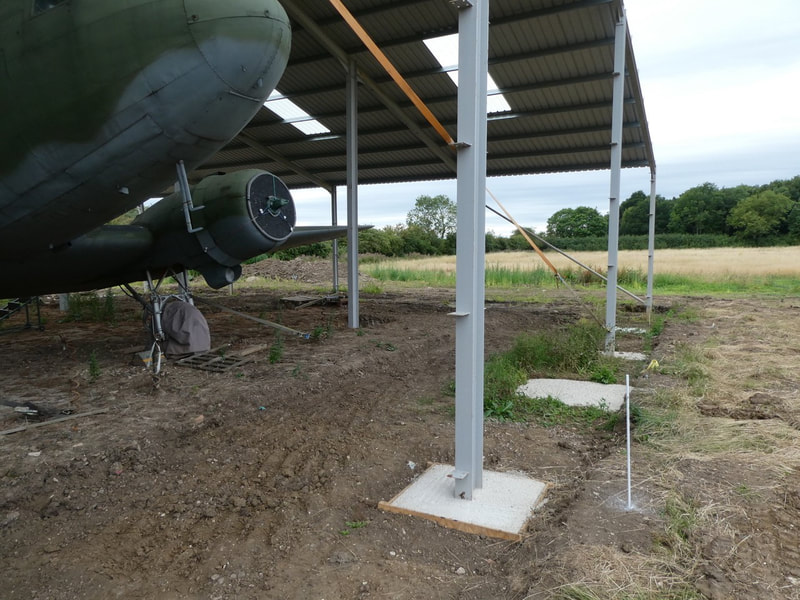 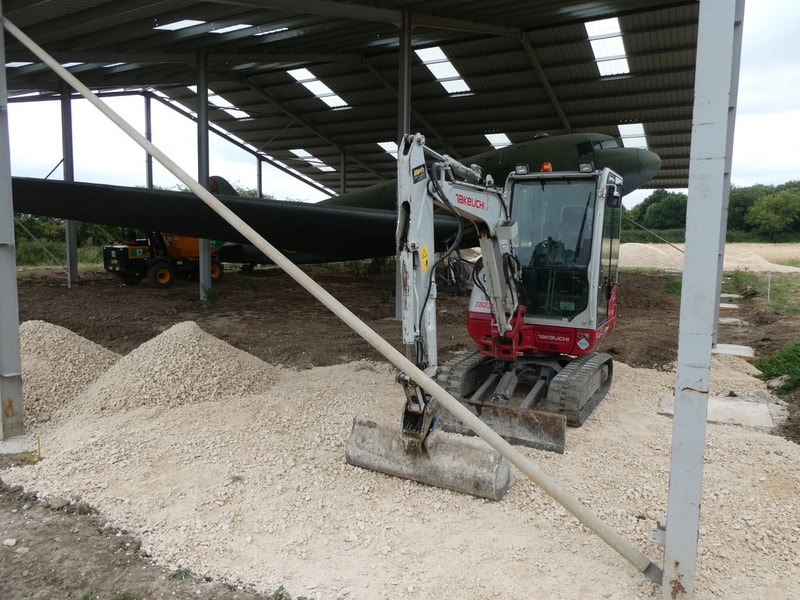 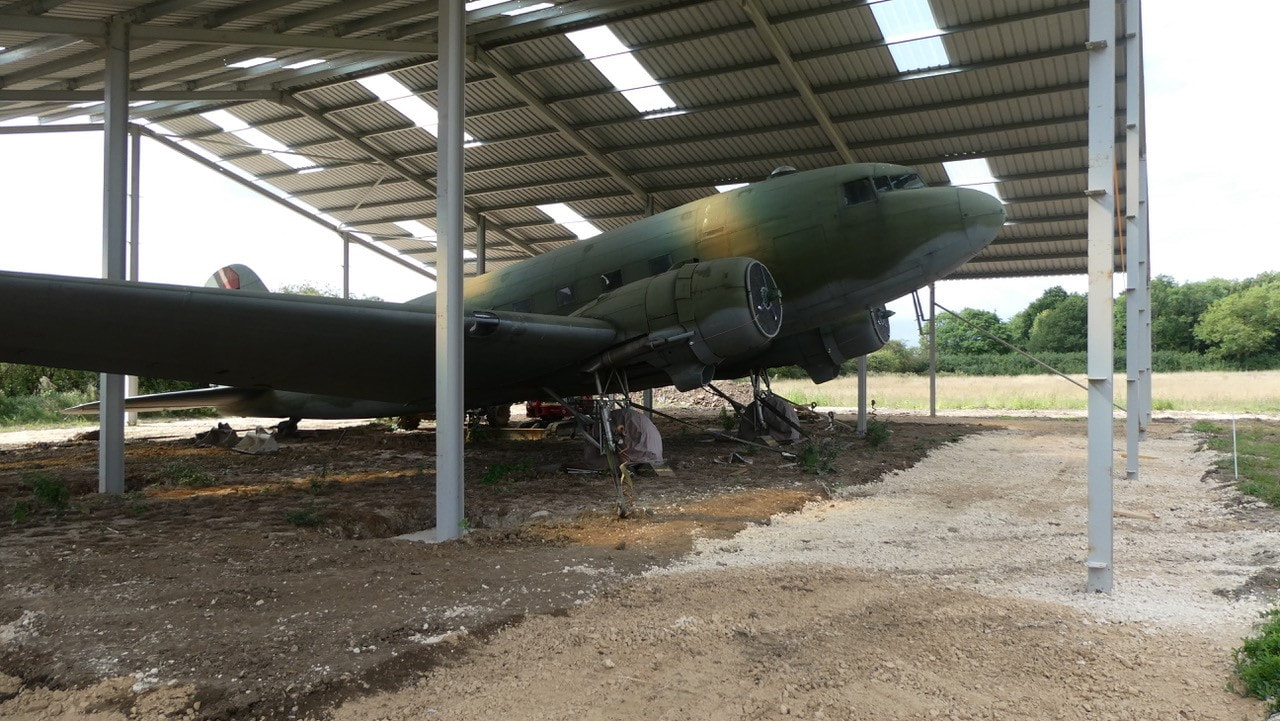 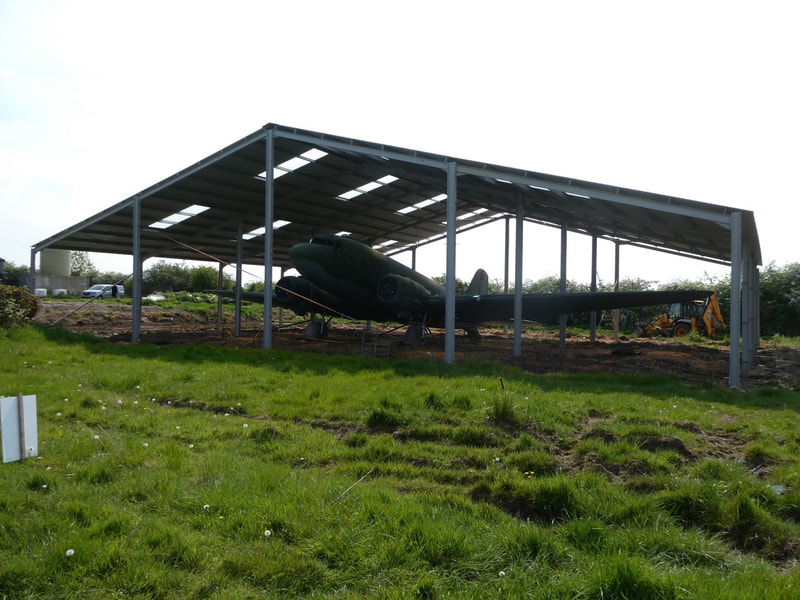 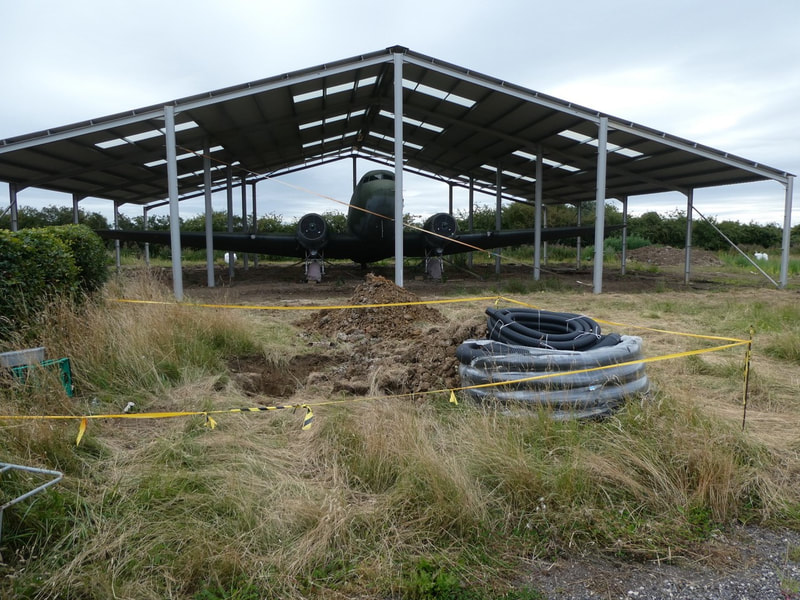 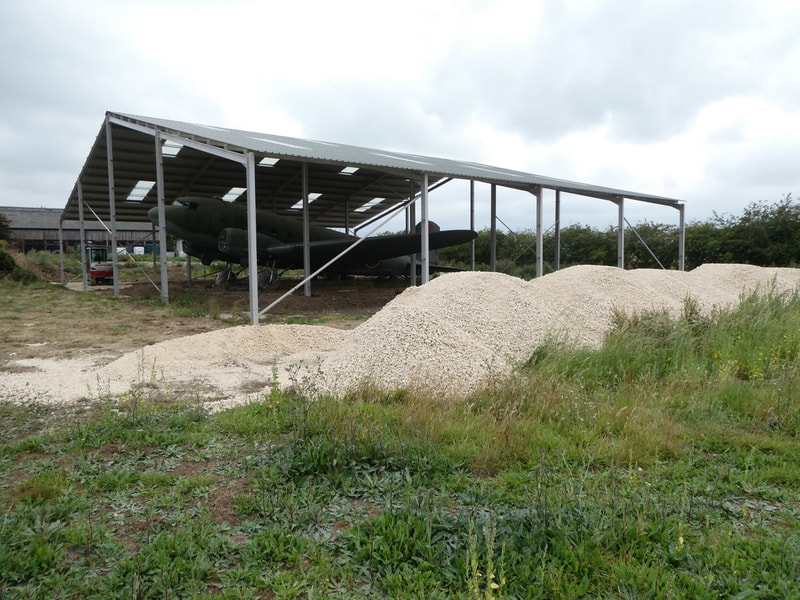 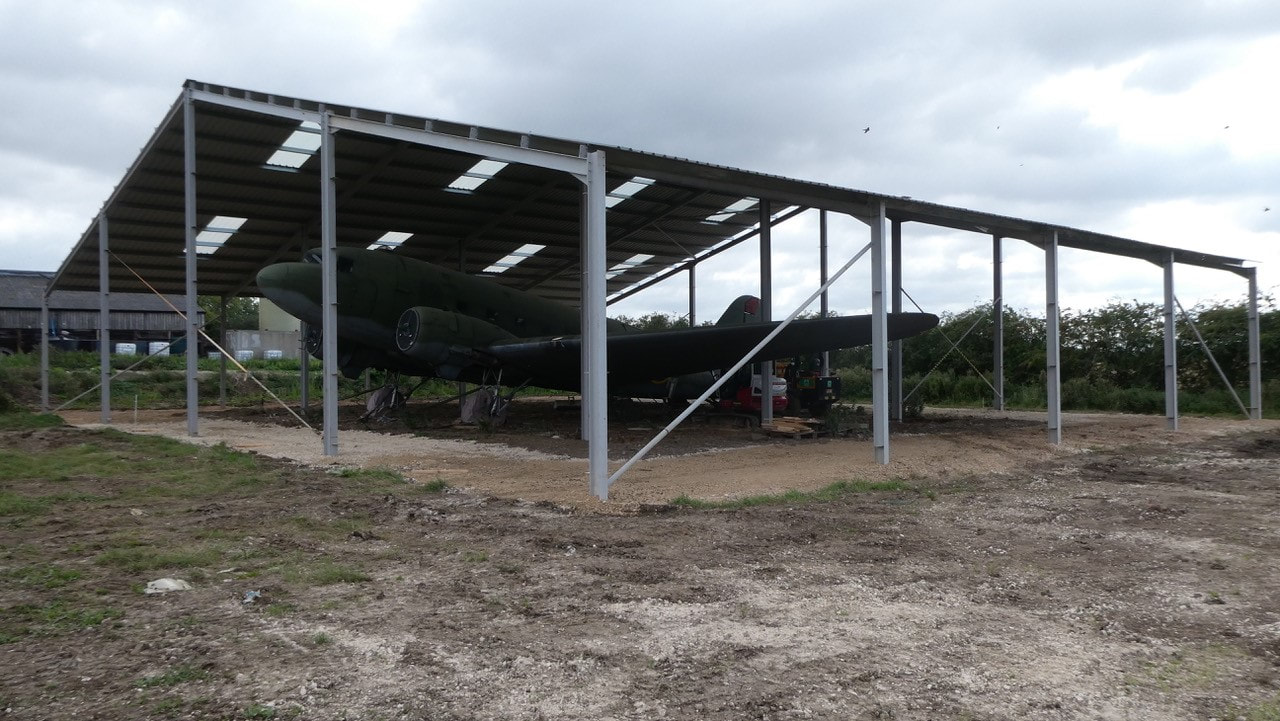 Winter 2019 / 2020 Update - Location, location......re-location! Hangar that Dak!!
Raising funds for the new Dakota Hangar and Dakota Restoration
As we approach the off season of Autumn / Winter 2019/2020, we hope to step up restoration work on KG651 and this is something that should be made a whole lot easier with the construction of our new hangar. This big project is well underway but we need at least another £20,000 in order to complete it.
Donate to the Dakota Hangar Project