This gallery contains images of aircrew that bailed out or crashed but survived.  They were either captured by German forces to become a Prisoner of War (POW) or they went on the run to try and evade capture. Whilst it came as no great surprise for aircrew to be captured, remarkably many aircrew evaded capture and made it back to their squadrons via well established escape routes run by resistances forces in occupied Europe. As ever with our collection, we sometimes have limited information about the photos so if you can add to the story then please contact us.
Sgt James Alexander Summers “Hamish” Philson RAFV 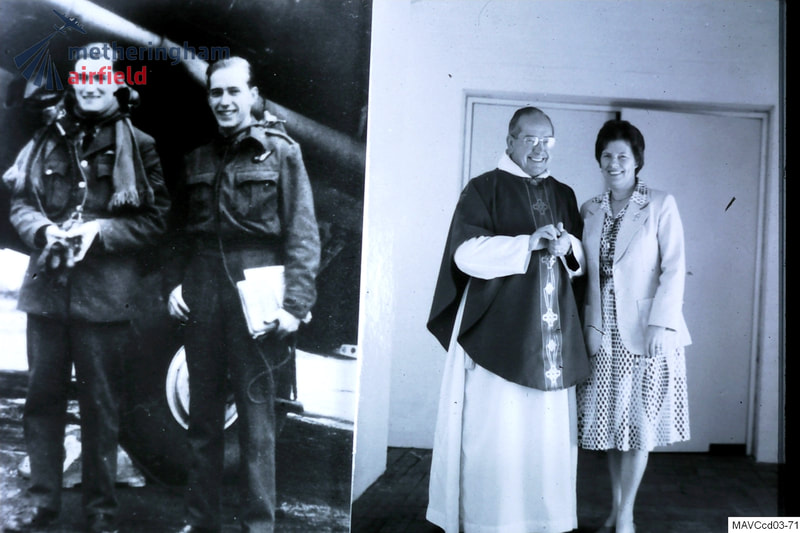 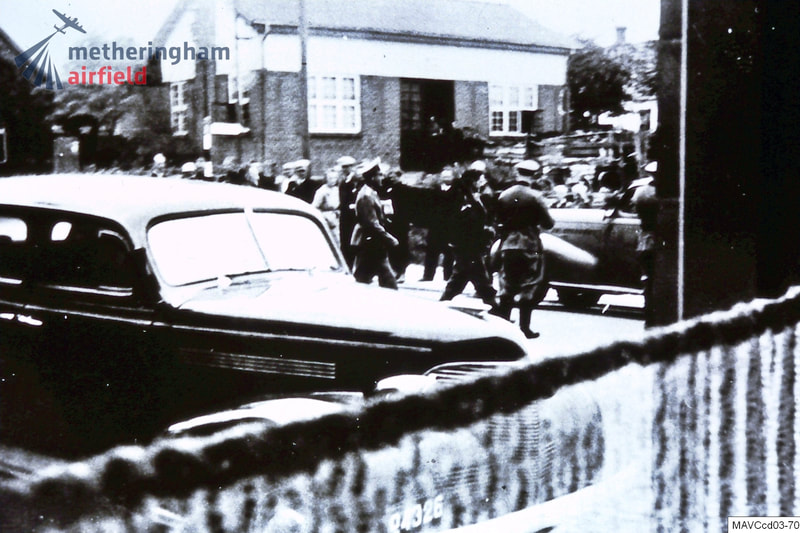 ​These two unattributed photographs scratch the surface of the story of a 106 air gunner who was shot down, evaded capture for a few days, later attempted an escape from captivity and led a full life after surviving one of the 1945 “death marches” of POW’s away from the Russian advance.
The first image “tops and tails” Hamish Philson’s story, depicting him standing next to a Hampden with a pilot identified as “Topping” while to the right he is pictured as a minister in the Australian clergy with probably his wife, Coralie. The second extraordinary image, taken by an unknown Dane, records the moment that he was handed over to the Germans by the Danish police force after an unsuccessful evasion.

Hamish Philson had already completed a tour of duty with 106 Sqn when he was requested to fly an additional operation by his commanding officer, Wing Commander Bob Allen (see his photo in the 106 Squadron Aircrews & Commanders section). On 11 September 1941 he took off from RAF Coningsby in Hampden AE300, piloted by W/O Jack Bannister, bound for the U-boat pens at Rostock. On the return from the target, over the Baltic Sea, the Hampden was hit by gunfire by a German nightfighter and the whole crew baled out successfully, Philson landing near Belle in Denmark. After four days on the run he was captured and taken to the Daugaard Inn in Daugaard village where, after initial questioning by Danish police, he was transferred to the custody of four German officers.
​
A few days later he was taken to Stalag VIIIB, Lambsdorf near Breslau. After about six months he switched identity with an Australian POW to enable him to join a working party, from which he escaped with another RAF POW. After eight days they were recaptured near Stenberwitz and given two weeks in the “cooler”. In 1945, among many Allied POW’s, Philson was marched by the Germans away from the advancing Russian troops. Near Braunschweig he was liberated by the 9th American Division and a week later sent to England.
After the war, Hamish Philson moved to Australia, becoming a minister in the Australian clergy. It is known that he was Rector of the parish of Victoria Park, moving as Rector at Cottesloe in May 1975.
He died in July 2019, aged 99.

Hamish Philson’s story of evasion and escapes has been well documented elsewhere; the above is a heavily abridged account. Useful research sources are: