In this gallery we honour the memory of those that paid the ultimate sacrifice in order that we should enjoy our freedom. 106 Squadron lost 169 aircraft on operations in WW2 and 59 of those were lost during their time at RAF Metheringham. 288 aircrew were killed and 50 more were posted missing just on  operations from Metheringham. Lest We Forget. 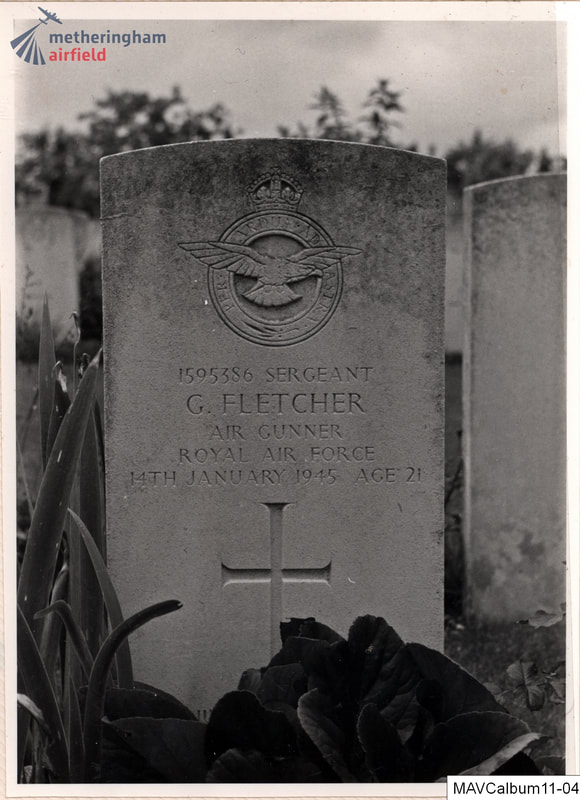 Sgt E B Smith and Crew - October 1941
This set of photographs depicts the funeral in Coningsby’s cemetery of Sgt Edward Smith. Sgt Smith was killed with his crew when their aircraft, Hampden I AD785, reportedly exploded in mid-air near Whitby early in the morning of 27 October 1941, returning from a raid on Hamburg.
The men lost in this incident were: Sgt E B Smith – Captain, P/O D R Bowden - Navigator, Sgt O Halward – Wop/AG, Flt Sgt D B Stables DFM – Wop/AG
NB. The grave reference partially obscured in Image 48-19-01 reads: “Row 65; Grave 1280. 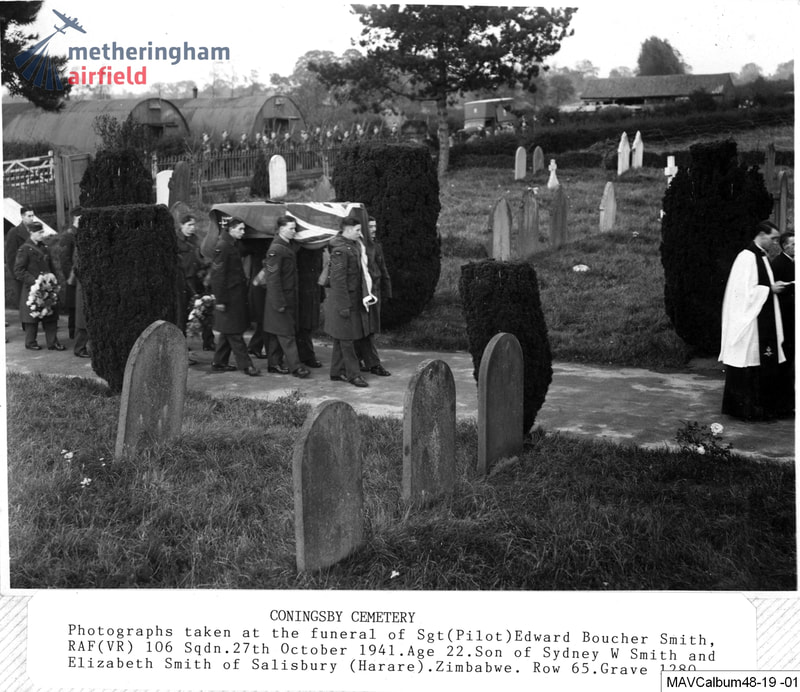 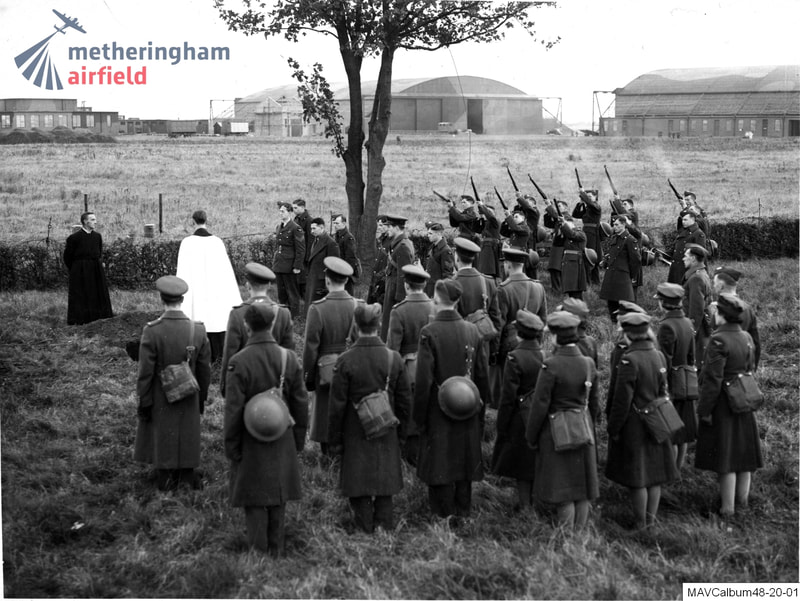 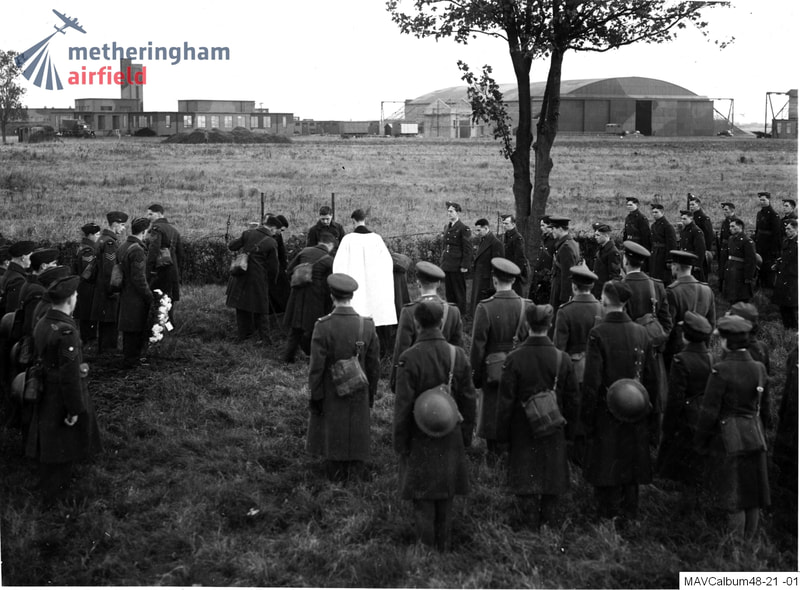 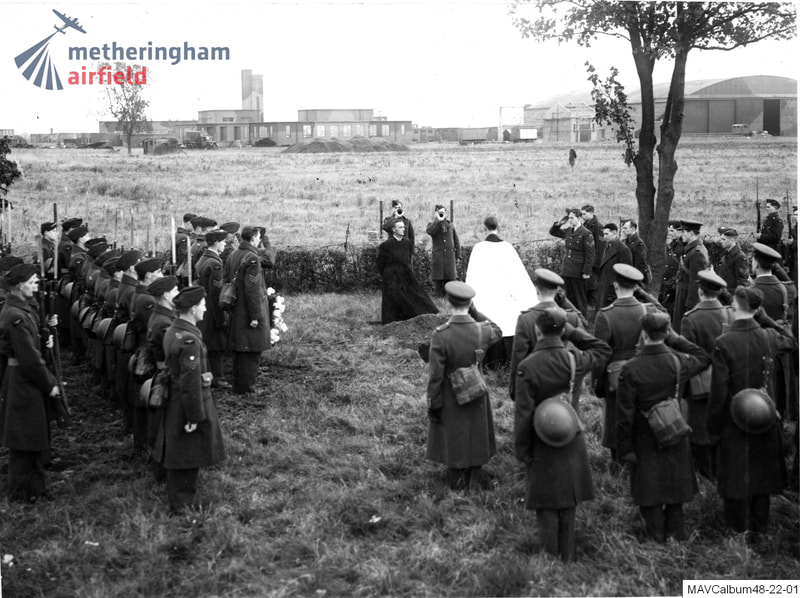 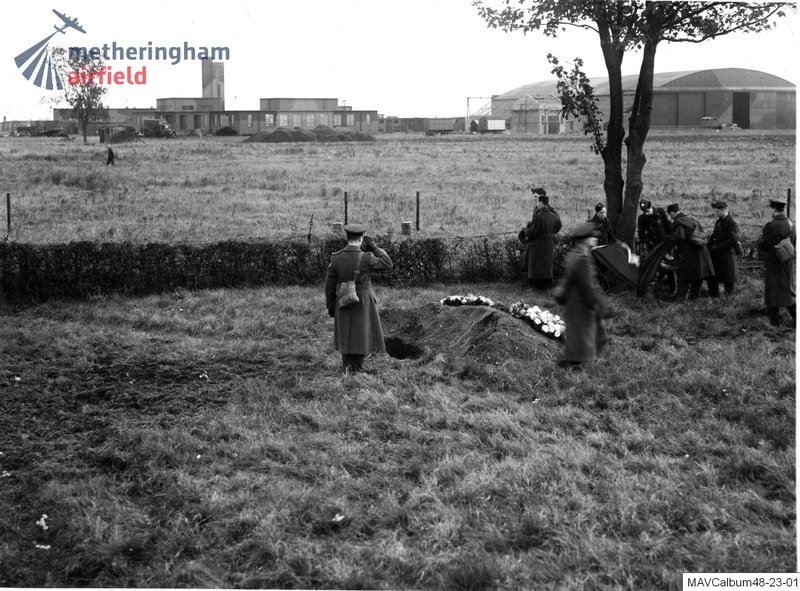 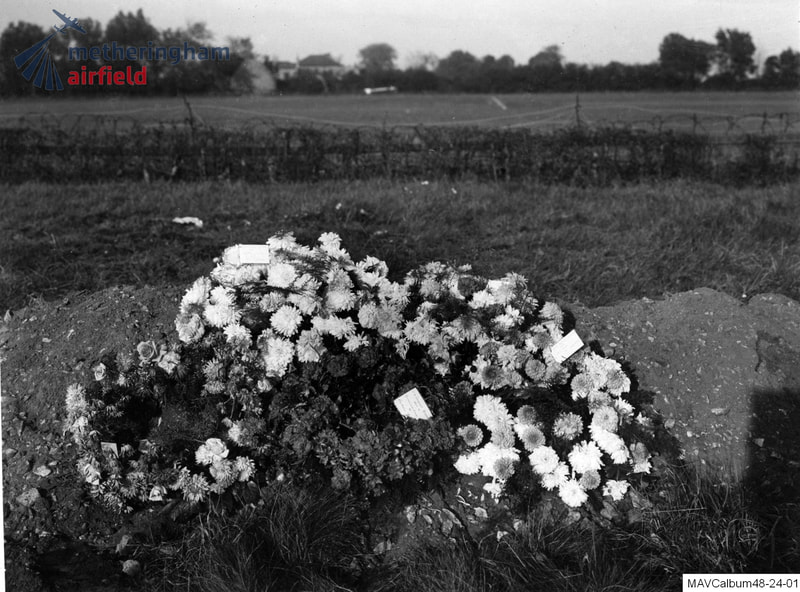 A mutual respect - The funeral of P/O Harry Stoffer
These photos depict the military funeral accorded P/O Harry Stoffer by the German forces occupying Denmark.
P/O Stoffer was captaining Avro Manchester L7463, ZN-S, on a bombing raid to the Baltic port of Rostock on the night of the 23/34 April 1942, one of six Manchesters contributed by 106 Squadron. L7463 developed an overheating engine - a common fault with the Rolls Royce Vulture engines, which eventually caught fire over Denmark. P/O Stoffer ordered his crew to bale out, which they did safely, but he perished when the aircraft crashed at Visgårde at 3.20 am.
Stoffer was buried by the Wehrmacht with other aircrew from nearby crashes in a ceremony at Aabenbraa cemetery by a Marine priest from Flensburg on 2 May. Also present were the Mayor and Chief of Police as Danish representatives.
The photos are also interesting from an historical point of view as illustrations of the German attitude to their occupation of Denmark at that time. The Germans considered the Danes as fellow Nordic Aryans and in exchange for Danish cooperation their occupation was officially regarded as a protectorate. Although not unique, this funeral with the Wehrmacht in dress uniform and a guard of honour firing a salute is a reflection of the official attitude that prevailed at the time. This uneasy state of affairs continued until August 1943 when the country was placed under a full miltary occupation.
As a sad footnote to the Harry Stoffer story, Guy Gibson - at the time the commanding officer of 106, mentions in his book "Enemy Coast Ahead" how Harry's wife Mary was working as a WAAF in the operations room on the night her husband failed to return to Coningsby.
P/O Harry Murdoch Stoffer, RAFVR, is buried in Collective Grave 11, Row 1 at Aabenbraa Cemetery, Denmark. 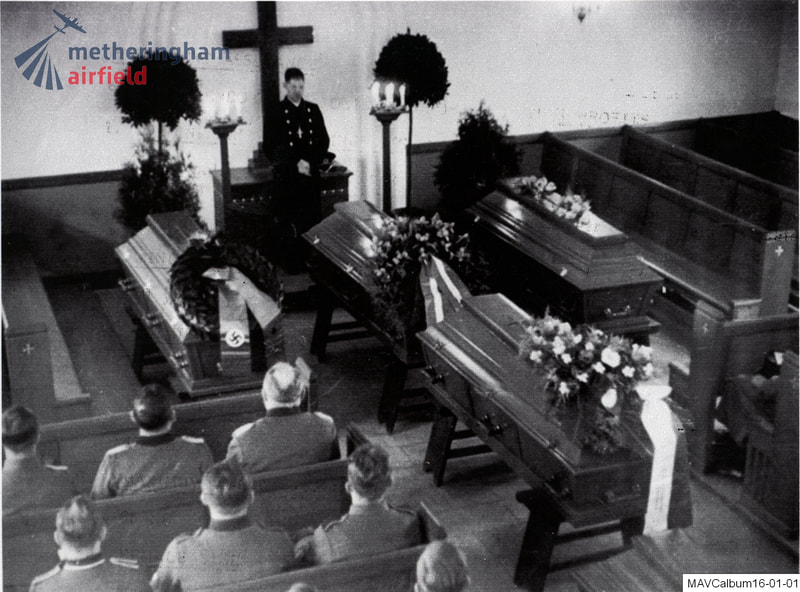 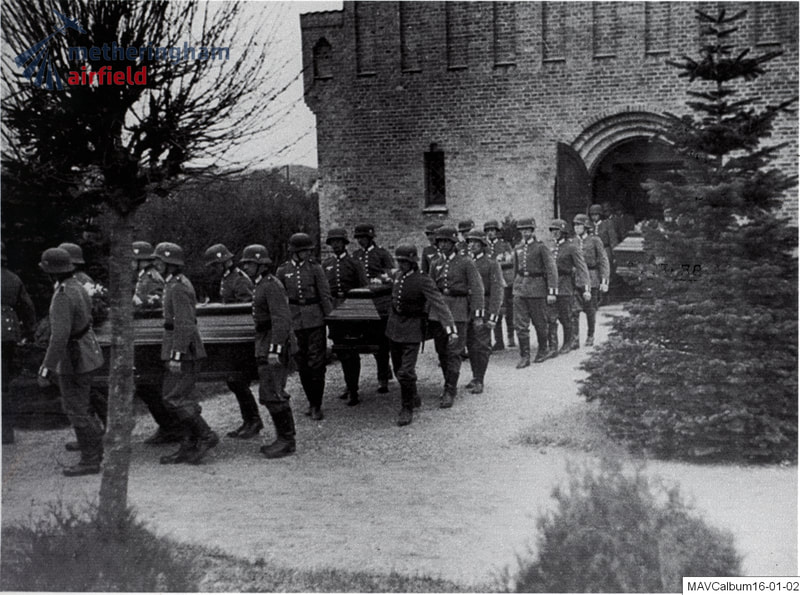 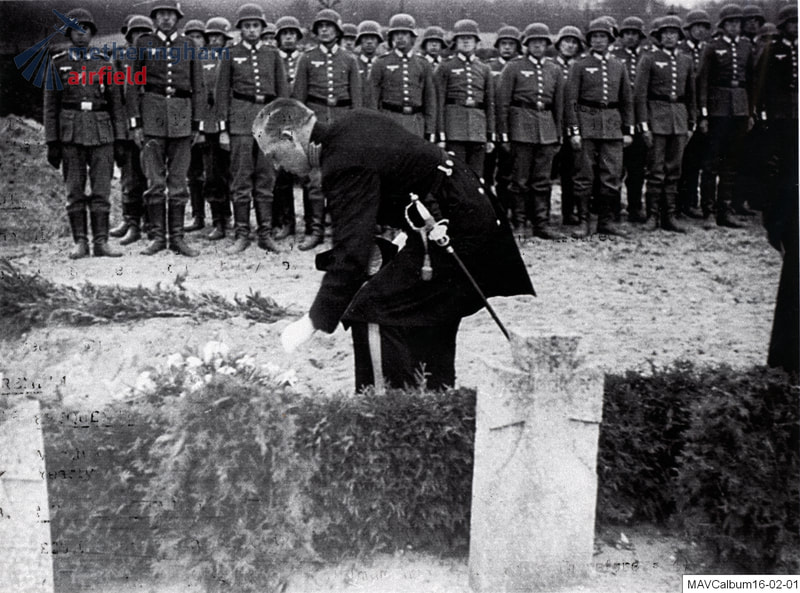 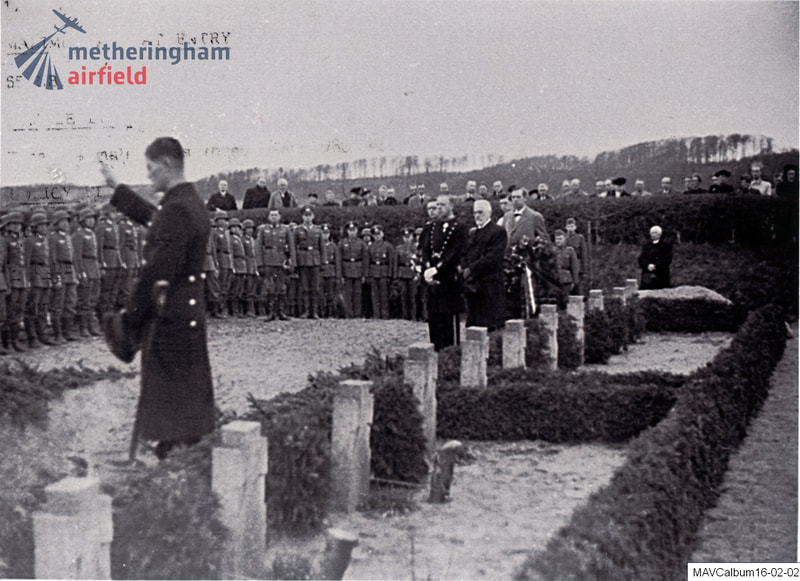 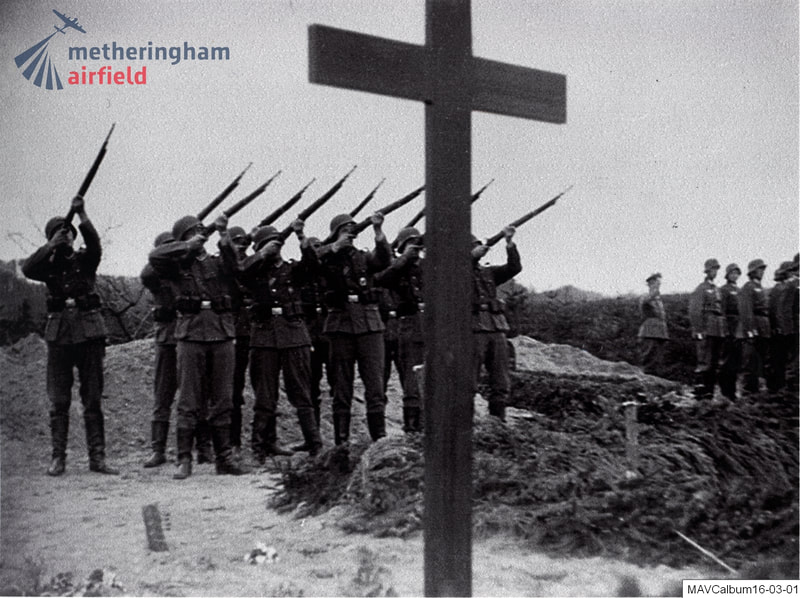