Here we have some images of 106 Squadron Air Crews and their Commanders which include amongst their ranks the legendary Guy Gibson who commanded 106 Squadron during their time at both Coningsby and Syerston. Where possible we have identified all crew members but often, the crew are only associated with their pilot. If you can provide any additional names and /or information please let us know.
106 Squadron Commanders and Crews 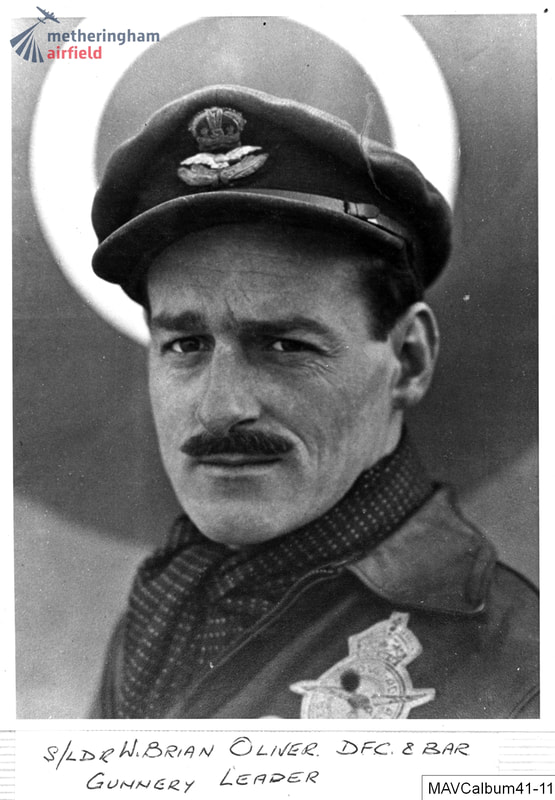 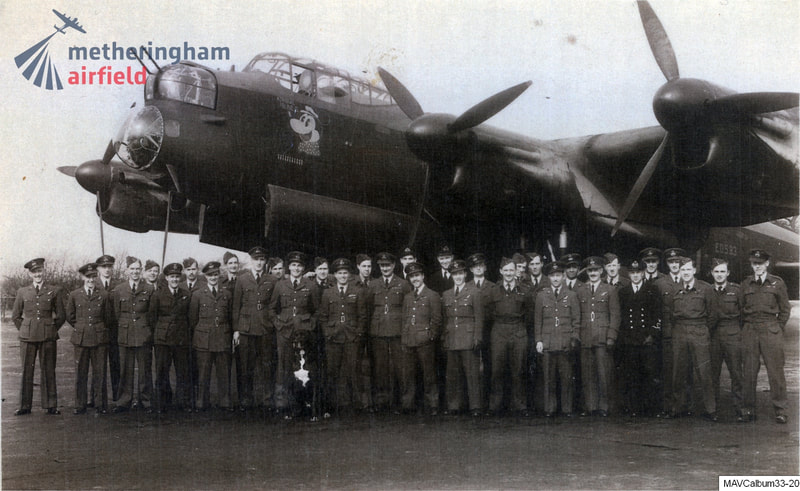 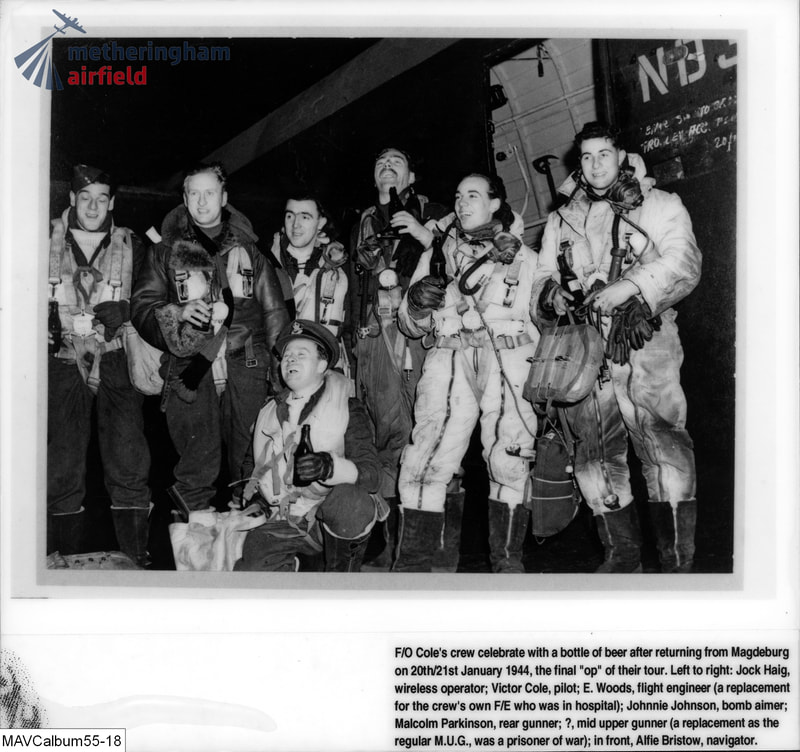 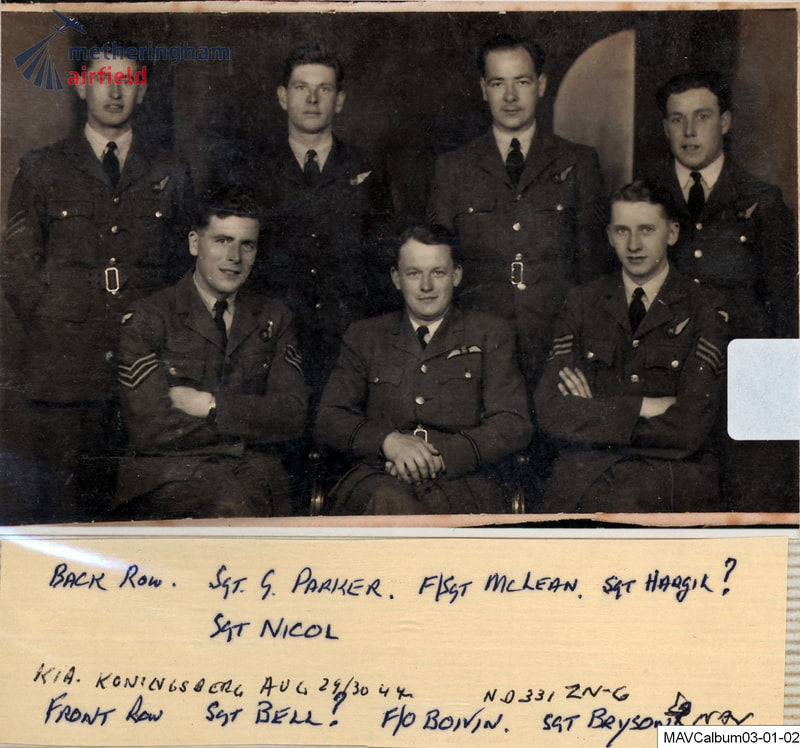 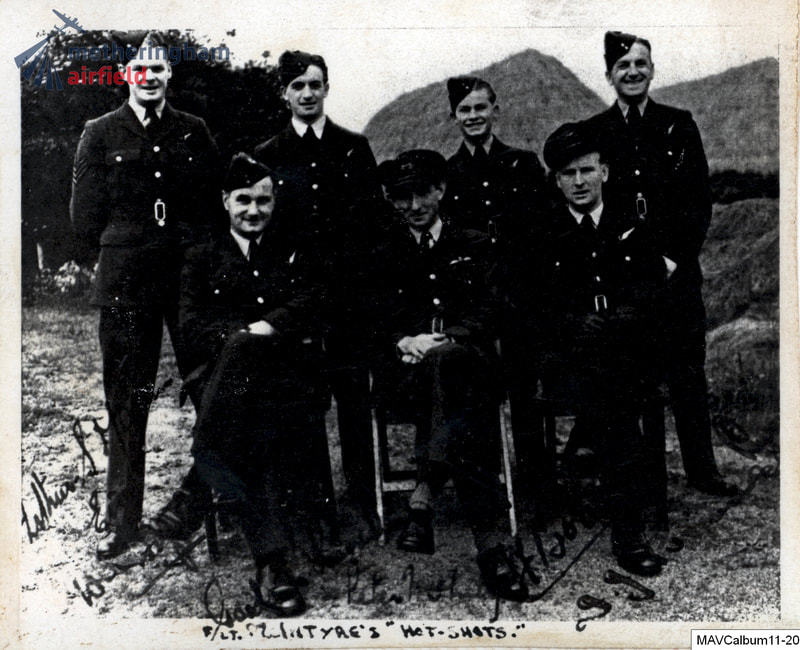 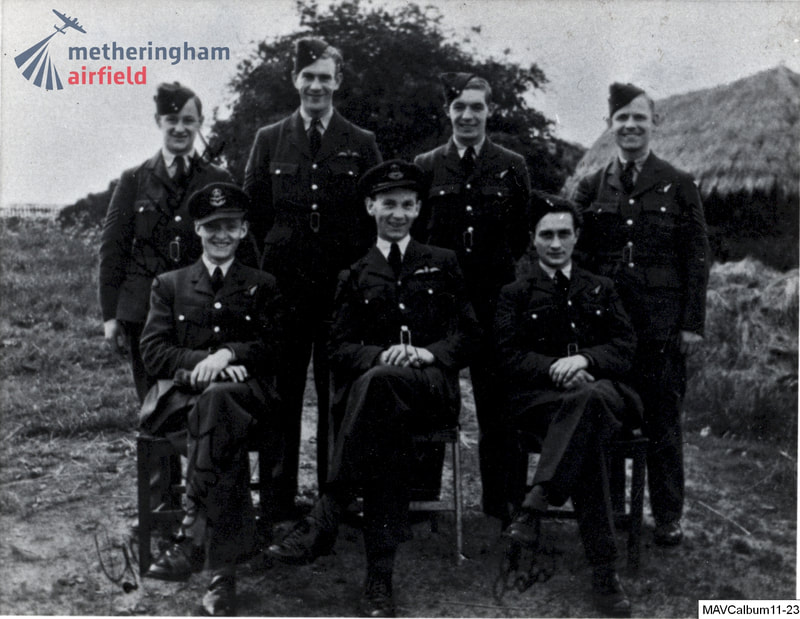 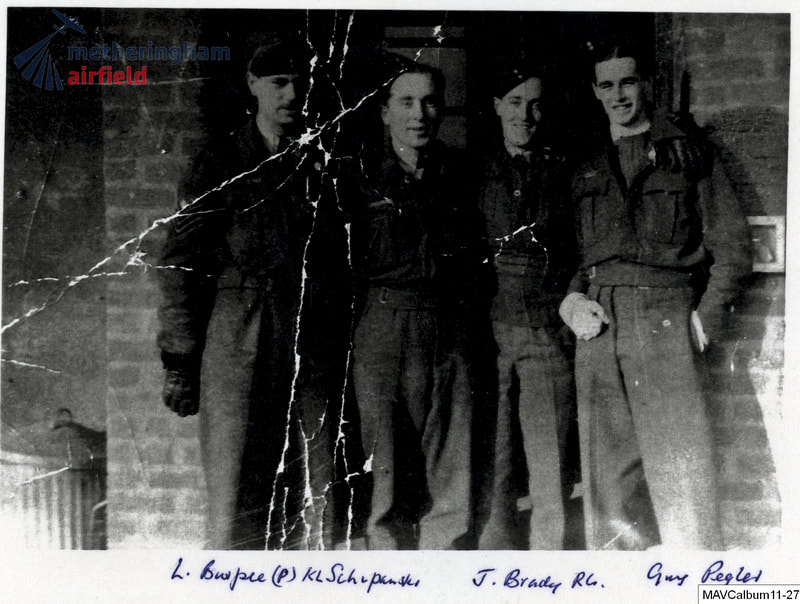 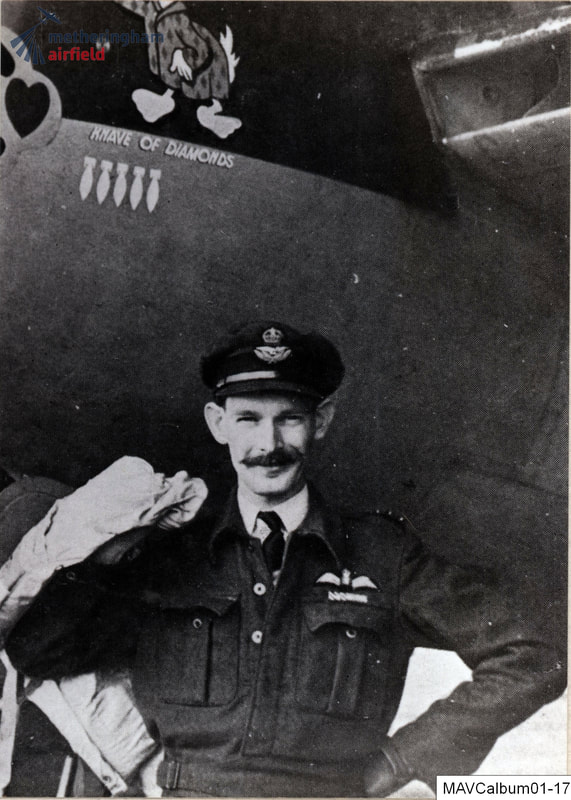 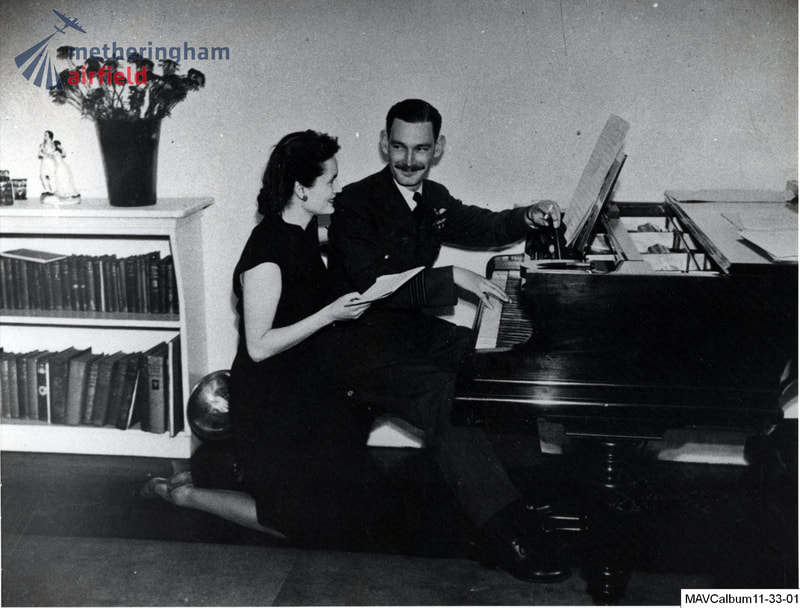 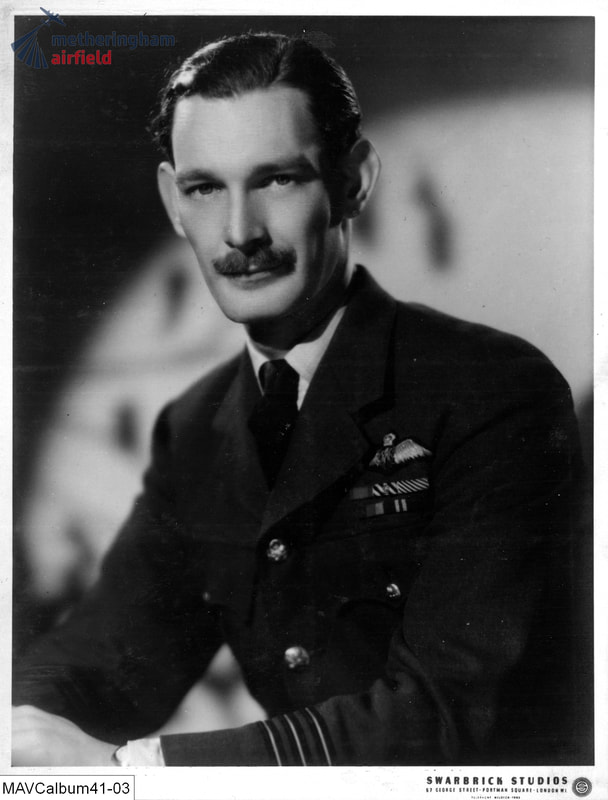 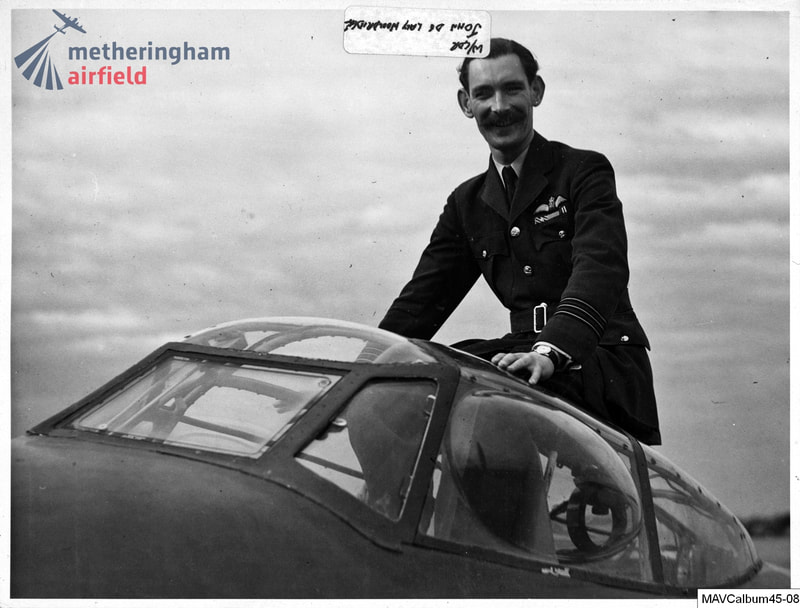 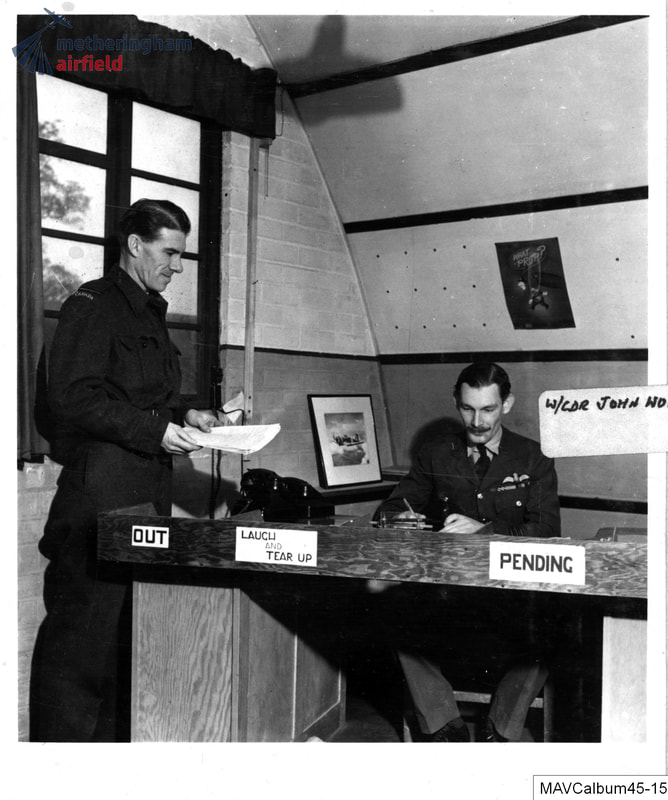 ​John “Dim” Wooldridge was a popular and respected Flight Commander with 106 and one of Bomber Command’s great characters. The space available here can give only a brief overview of his varied life; there are several rewarding sources of information to the researcher – see below.
Wooldridge joined 106 as a Flight Commander having previously flown with the RAFVR before signing up with the RAF in 1938 as a Sergeant Pilot, having falsified his age to join early. He took part in the first bombing raid in World War II, earning a DFM. He was commissioned in August 1940 and joined 106 in May 1942 from 207 Sqn, filling the vacancy for B Flight Commander. He was awarded the DFC for his part in the 1,000 bomber raid on Cologne later that month.

He had a difficult relationship with his commanding officer, Wing Commander Guy Gibson, who nevertheless commended Wooldridge for his many attributes as a pilot and leader in his book “Enemy Coast Ahead”. It’s also fair to record that Gibson didn’t appreciate Wooldridge’s tendency to arrange things to his favour – not least of which was the “theft” of Gibson’s favourite Lancaster R5681 ZN-O on a mission in July 1942!
Having completed a total of 73 missions, fourteen with 106, Wooldridge left the squadron for the tri-service Petroleum Warfare Department in London where he helped develop, among various projects, the  Fog Investigation and Dispersal Operation (FIDO) fog dispersal system – with which Metheringham was equipped in the summer of 1944. Sqn Ldr Wooldridge returned to operations in March 1943 with 105 Sqn, flying Mosquitoes on low-level bombing raids. He survived the war having completed 97 missions.

Music had been a life-long passion for John Wooldridge and even throughout the war he had spent his spare time playing and composing. After the war he wrote the scores for fourteen films and composed nine other works. He married his first wife, Mary, in 1942 and their son, Morris Latham, went on to become a pilot. In 1948 he married the actress Margaretta Scott with whom he had a son, Hugh, and a daughter, Susan, who followed her mother into acting.
​
John Wooldridge was killed in a motor accident in 1958, aged 39, and is buried in Cholesbury, Buckinghamshire with Margaretta.
Recommended research sources:
Wing Commander Edmund Keith Piercy DFC
​ 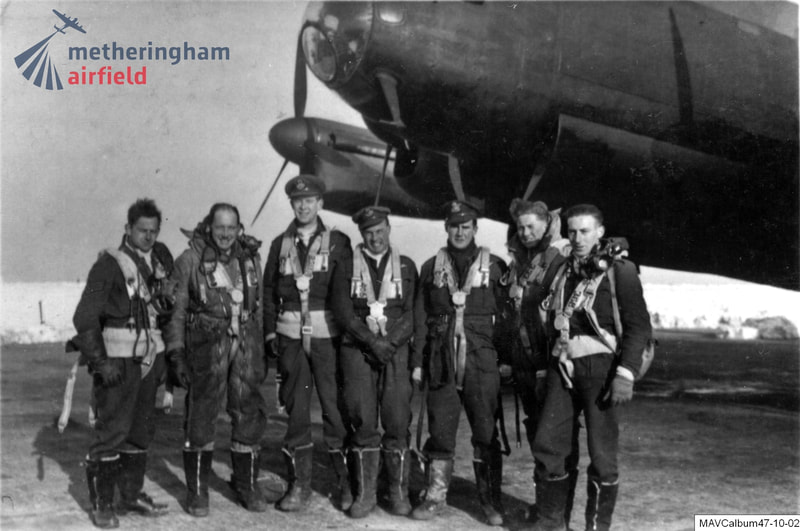 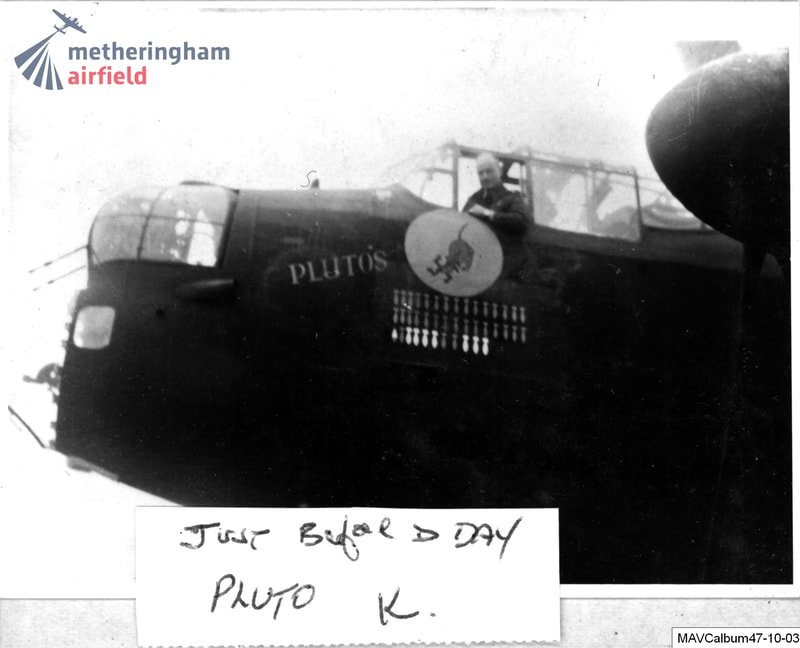 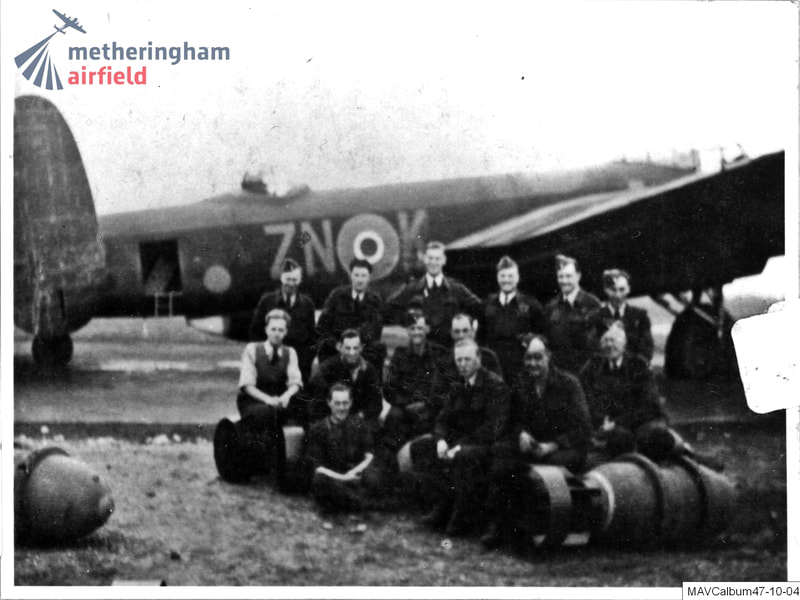 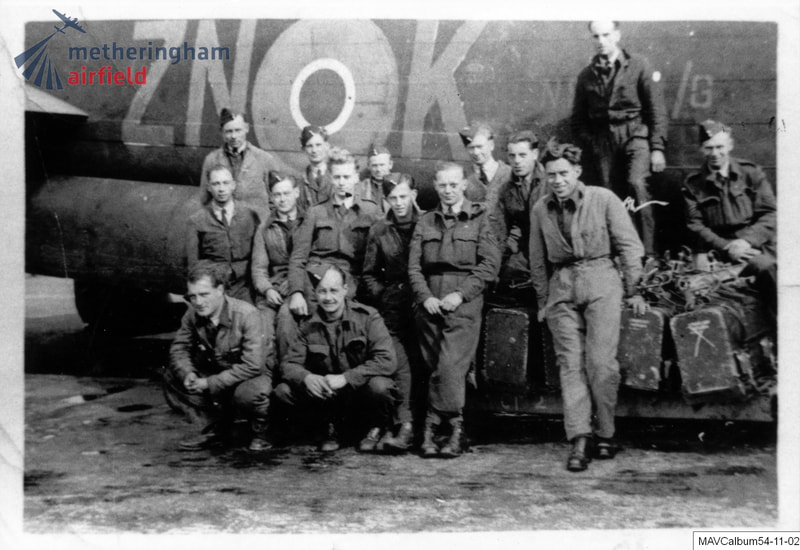 The first photo in the set above is the only identified image in our archive of another of 106 Sqn’s notable commanding officers, Wing Commander Edmund Keith Piercy. Piercy is in the centre.

W/Cdr Piercy arrived at RAF Metheringham on 8 March 1944 as the Commanding Officer elect. He had previously served on a Wellington squadron on the Middle East before being “rested” as an instructor at 1661 CU at RAF Winthorpe. He inherited his crew during this time and after their Lancaster conversion at 5 LFS at Syerston (106’s old home) he was posted to 106 to succeed W/Cdr R E Baxter DFC. W/Cdr Piercy was a shy man – even to the point of never telling his crew his Christian names, but other facets of his character were revealed in his accomplishment as a drinker and his habit of riding his motorcycle up and down the Metheringham runways – to the disapproval of G/Cpt McKechnie GC, the station commander.

There is some uncertainty as to when W/Cdr Piercy actually assumed command; some records suggest 13 March whilst another shows 30 March. What is not in doubt is that he wasted no time in placing himself on the Order of Battle, flying his first operation on the night of the 15/16 March, leading the squadron on a raid over Stuttgart. A study of the Operational Record Book shows that Piercy didn’t flinch from action, flying virtually weekly thereafter – at a time when squadron commanders would have been expected to fly operationally perhaps monthly. He was so active that he had finished his tour of duty with the squadron by mid-August and stood down as CO on the 25th of that month. He was obliged to take temporary command of RAF Metheringham five days later after the tragic loss of the much-loved G/Cpt McKechnie – an officer who flew operationally despite there being no requirement for such a commitment.

W/Cdr Piercy finally departed Metheringham on 4 September 1944 and, seemingly in keeping with his nature, little else can be found about his further career. It is reported that he returned to the Middle East where he lost his life in an accident in 1945. During his time with 106 Piercy was regarded as an excellent pilot and epitomised the type of leader who just got on with his job, not flinching from putting himself in harm’s way.
Whilst at 106, W/Cdr Piercy acquired the nickname Pluto, which he extended to his favourite Lancaster ND682, ZN-K. The second photo above shows this Lancaster, identified in their photo album as taken “Just before D Day”. This fits with the ORB which confirms that Piercy flew this aircraft on the night of 4/5 June 1944.

Intriguingly the photo of the crew in the third photo above is identified as “The Pluto crew, Metheringham, Feb 44”. This would actually pre-date Piercy’s arrival on the squadron but in the context of the accompanying images it has been assumed that the crew is indeed Piercy’s. A copy of the photo elsewhere in our archive has been annotated “The Piercy crew” and it is therefore offered here as being correct.

This final photograph in the set above also shows W/Cdr Piercy’s Lancaster, although this one is undated and not annotated so we cannot identify the personnel. W/Cdr Piercy seems to have been camera-shy, perhaps not surprisingly, and an extensive search online has failed to produce any other photograph of him or, indeed, any detailed information on his career outside of his 106 service. We would be grateful for any further information or photograph of this very effective but comparatively unsung 106 Squadron commander. 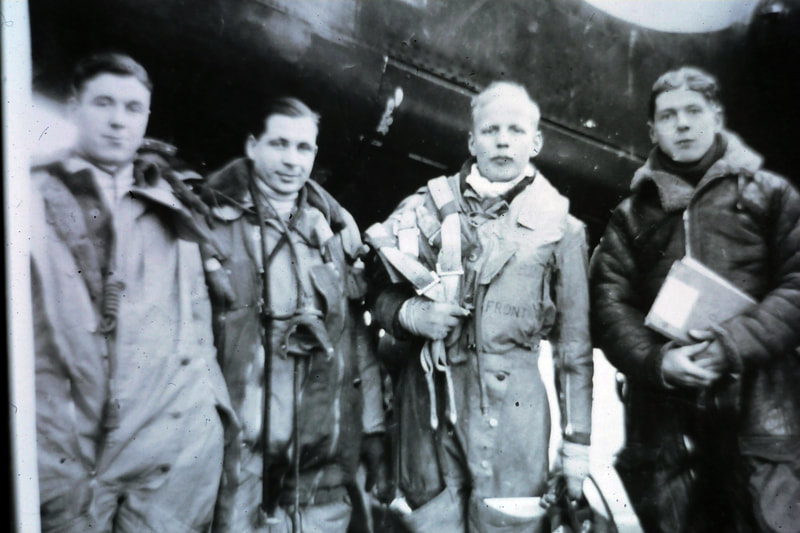 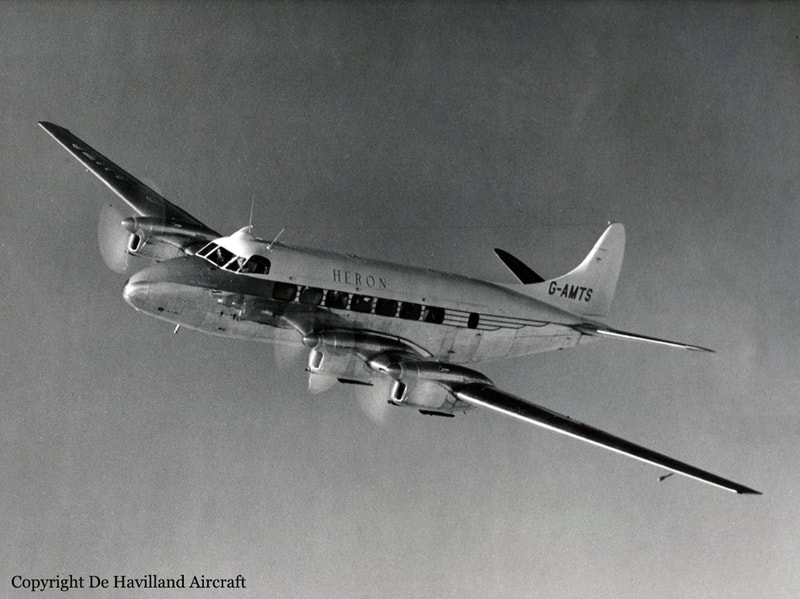 ​A comparative rarity – a pilot with German ancestry (albeit distant!) flying operationally for Bomber Command. Seen second from right with, apparently, his Hampden crew. The second photograph, of de Havilland Heron G-AMTS, relates to the very end of this extraordinary man’s flying career.
Thanks to information kindly provided by his son, Richard, we now know considerably more about Otto Altmann’s varied flying career than when this piece was first published here.

The Altmann family tree has been traced back to Leipzig in the 12th century, where, intriguingly, the cathedral contains a statue of Saint Altmann! Frustratingly the trail goes cold for 700 years, before re-emerging in Pietermaritzburg, South Africa. Later on, the Altmann family were on the move again, via Ireland, finally settling in Warrington where Reginald Altmann was born. Incidentally, his son reports that he could only remember his grandmother calling her son “Reggie”, everyone else – including his wife, referring to him as “Otto”. And it’s his wife that really cements the local interest in Otto Altmann: whilst serving in Lincolnshire he met a local girl at The White Hart in Lincoln and married her!
According to his Record of Service, Otto Altmann joined 106 Squadron as a Flight Lieutenant on 11/8/40, having previously been on 61 Squadron (1938-9) &144 Squadron (1939-40). During his service with 106 Sqn Altmann became considered a senior pilot. He participated in the 1/2 March raid on Cologne, the first operation in which 106’s Hampdens had dropped bombs rather than mines. 106’s Operational Record Books show that he was flying for the squadron up until 2 September 1941, before being posted to 83 Sqn on 28 September 1941. After completing his tour of duty he was posted to various training and OCU's in 1942 and then to Pathfinder HQ, RAF Wyton, as a Squadron Leader in 1943.

He returned to flying again in late 1943 with 271 Sqn, Transport Command, flying Douglas Dakotas. He flew in support of the Arnhem operation, towing Horsa gliders, on 18 September 1944. Altmann was then posted to 341 Wing in Burma, where he burst an eardrum and was invalided out of service.
He also served with 31 Sqn (part of 342 Wing at that time) as an Acting Wing Commander, confirmed in The London Gazette of 6 November 1945 which announced his award of the DSO, adding to his DFC. The citation reads: “Since being awarded the Distinguished Flying Cross, this officer has completed a second tour of operational duty with Bomber Command. He then commenced a third tour of duty with Transport Command, during which he flew on many day and night sorties and has participated in glider tows at Arnhem and during the invasion of Europe. Since assuming command of his present squadron Wing Commander Altmann has flown on many supply dropping operations in Burma. Throughout a long and distinguished service career, this officer has consistently displayed exceptional keenness and enthusiasm for his work, courage and devotion to duty. Under his inspiring leadership his squadron has accomplished some excellent work.”

You can’t keep a good pilot down, however, and after a couple of years’ effort Otto returned to flying around 1947, flying for the Ministry of Civil Aviation and Britannia Airways. In 1959 he met an old wartime flying chum who offered him a pilot’s position in Rootes Group, flying their executives in a de Havilland Heron – a job he loved. Sadly, whilst training a new pilot, the Heron failed to gain sufficient height during a “touch and go” and crashed into trees close to Biggin Hill aerodrome. Both pilots were lost. A photograph of the Heron, G-AMTS, has been added to this article.
Viewed from a distance the loss of Otto Altmann after such a long, varied and distinguished career lends weight to what plenty of WWII operational pilots believed: training was every bit as hazardous as facing the enemy…
Otto Altmann’s story is a prime example of what research into service with 106 Sqn can eventually unearth. If anyone reading this can provide any information on any aspect of life at RAF Metheringham or service with 106 Sqn we would be delighted to hear from them.